I have been wanting to post this for a while now but have needed time to grieve. 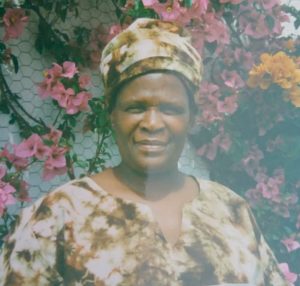 On Tuesday 9 June I received a call: Ms Esther Kostina (Mama Esther, as she was known at HOC) had passed away.

Who was Mama Esther?  She was one of the strong foundations that helped make HOC what it is today.  She became my teacher and advisor: a strong, fearless dignified no-nonsense woman, full of wisdom.

I met Mama Esther at HOC in June 1987.  She worked for a man that had asked us if he could cultivate a portion of our land and move onto our premises.  The farmer moved in and brought Mama Esther with him.  Soon I noticed she worked from morning to night, Monday to Monday, no time off, no day off.  I confronted the man who was dismissive and arrogant.  Mama Esther could not communicate in English; she was Xhosa and spoke to the farmer in Afrikaans.  I took one of our residents, and through this interpreter, I learnt that she was receiving one bag of mealie meal per month, some soap and bits of leftover food from his table.  The farmer attended our church’s Bible college.  After a few meetings he was expelled, still unrepentant.

I invited Mama Esther to join us at HOC, and she did.  A few months later she travelled home to fetch her youngest son, five years old, who was being cared for by his school-going sisters and a helpful neighbour; her husband had long deserted her with no warning.  Thembelani was a couple of years older than my kids.  They grew up together, attended nursery and primary school together. Thembelani went to 4-ways High School, completed his Matric and is now a manager at a furniture store. 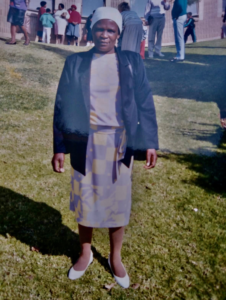 In 1988 Mama Esther took me to the end of HOC’s long but narrow piece of land and pointed to a tree. Under the tree, I could see a very small tin house. A family was living there: father (Thomas), mother (Vivian) and two children, Monwabisi 4 years old and Sitembele 2 years old. Vivian was Mama Esther’s cousin.  Two weeks later the family moved into one of HOC’s family cottages.  They lived with us until the boys completed Matric, and then they bought their own house in Diepsloot.  But that is a story for another day.

She was a disciplinarian, and Thembelani made her so cross when he would run away from her wrath! We would just hear her voice THEM-BE-LA-NI, and we knew he was in trouble, but she would end up laughing and say, “You see? I’m getting too old to catch this young one.”

Mama Esther filled many roles at HOC at different times: she cooked for the whole community, was our housekeeper, helped look after my kids and the kids we took in as boarders during the school year. She loved to work in the massive strawberry patch the two of us had started and did the one job I refused – supervise the slaughtering of chickens every Tuesday (I am grateful we no longer have those five chicken houses anymore!).

When Thembelani completed his Matric, Mama Esther decided to retire: “I’m tired Xana; I want to go back to my house in Queenstown, grow my own vegetables and relax.”  It was a little bit hard to see her go; I missed her strong, reassuring presence.  But we kept each other’s numbers and would phone every now and then.

I saw Mama Esther for the last time when our family visited her in Diespsloot two years ago; she had come from her hometown (Queenstown, now Komani, in the Eastern Cape) and was staying with her cousin.  She couldn’t see very well; she was frail, but we still laughed and remembered some of the early stories of HOC.  I’m grateful for that last visit; I managed to tell her how much she had meant to me, my family and HOC.

Thank you, Mama Esther; your life enriched mine in more ways than you can imagine.

RIP Mama Esther.  I miss you.